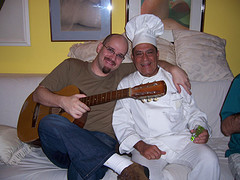 The main inspiration for Cachaçagora was the passion for this spirit that is shared by my in-laws, Claudia and Kede, who live in Rio de Janeiro. Claudia — you occasionally see her referred to as "Mamãe" here — is the president of the Confraria de Cachaça do Copo Furado, a group that regularly meets to talk about cachaça. (The name, translated, is "The Cachaça Brotherhood Of The Pierced Glass.")

Anyway, Kede (pictured in the chef get-up) gave us some expert, in-country context for our blind tasting. Read the translation after the jump. 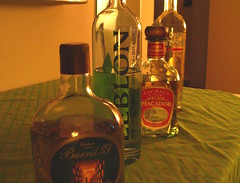 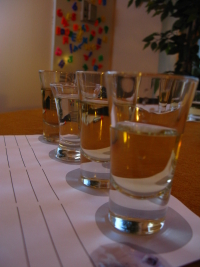 On Thursday, September 4, my wife and I held Cachaçagora's first blind tasting here at the Gomecile. Here were the contenders:

All of these are aged in oak barrels, anywhere between six months and five years. Two — Leblon and Cuca Fresca — are available in the United States. The other two were retrieved during visits to Brazil and, near as I can tell, are either not widely available in the U.S. or not available at all. 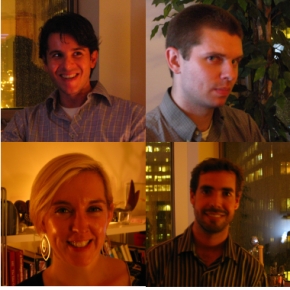 Each cachaça was poured prior to the guests arriving. Our tasters were encouraged to look for smoothness and depth-of-flavor, rating each cachaça on that basis according to whether it was their first, second, third, or fourth choice. I then averaged the scores (like golf, achieving a lower number is best) and unveiled the rankings at the end.

As Fred was sure to mention, no cachaça was clearly "bad". He, in particular, struggled to find a number-one choice. That said, all tastings demand a ranking of some type.

Find the results after the jump.