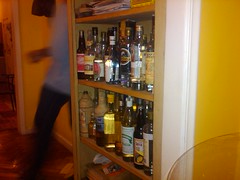 My in-laws have about 300 bottles of cachaça in their collection. They are quite well-known within Rio's cachaça-appreciating community and the surrounding areas, so they've amassed quite a stash.

Every time I visit them, father-in-law Kede generously pulls out some rarities and lets me experience the wide variety that makes cachaça the wonderful spirit that it is. (One gem was a cachaça, not yet on the market, that was aged ten years in carvalho (oak) barrels and will go for about $100/bottle. But we'll get to that later. I'll let you stew in your own wrenching envy until then.)

This time around, Kede decided to go into the furthest corners of the cachaça cabinet. Some of the strangest items weren't even cachaça, but bear mentioning anyway since they were just too fascinating not to share.

First is another alcoholic beverage indigenous to Brazil, tiquira. It is far less well-known than cachaca and for very good reason: it is truly horrible. I'm certain that it was distilled and used as a torture device back when Brazil was under a military dictatorship. 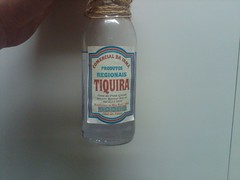 Tiquira is distilled from the manioc root. Manioc is a staple of Brazilian cuisine, taking its most familiar form when ground up, toasted and served as farofa. It's also a decent (if fibrous) french-fry substitute when chopped up into sticks and fried.

You can't quite see it in the photo, but tiquira has a mellow pink hue. Don't let this fool you, though. There should be a binding resolution from some self-important international governing body that applies to this stuff. Tiquira will short out the part of your brain that once knew the difference between stalagmites and stalactites. Poof! High-school geology class, gone in a flash. Sorry, Mr. Tyler. Was nice to know you.

Next, we have a non-alcoholic, weakly flavored, spiced tea beverage called "Pau do Indio." 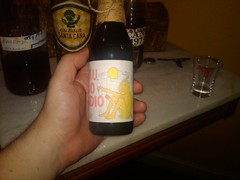 You can click on the image to get a better view but, yes, the picture depicts exactly what you think it does.

And, while I'm treading into NSFW territory, let's go to this third and final sample, an actual cachaca. 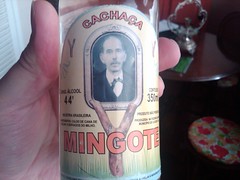 You might wonder why the label for Mingote cachaça depicts a slingshot stuck in the ground. According to a family legend, the patriarch pictured on the bottle was quite the wanderer. This necessarily meant that, occasionally, he had to cop a squat in the forest when going "number two." Reportedly, the man was so well-endowed that he had to prop his prodigious member inside the "Y" of the slingshot so as not to scuff it on the filthy ground.

Seriously, folks. I'm still gathering notes, pictures and video from my most recent trip to Brazil. (Some of it, sadly, is awaiting restoration after a computer crash. Until then...

Because All The Good Names Are Taken, Even In Portuguese

They say that some cultures have a lot of names and shades-of-meaning for the things that matter most to them. Many of us have heard the legend (largely bunk) that Eskimos have dozens of different words for "snow", for example.

Suitably, then, the Brazilians have more than a word or two for "butt" — popozão, traseiro, bum-bum, bunda, pandeiro...

When I was visiting in 2008, "Mulher Melancia" ("Watermelon Woman" née Andressa Soares) had apparently taken the country by storm, really for no other reason than a prodigious posterior.

(Perhaps not unlike our own J. Lo, Vida Guerra, Kim Kardashian...)

Anyway... Today, I learn about Cachaça Na Bunda. Basically, "cachaça in the butt" made from cana grossa ("fat cane").

The coolest thing about this cartoon, aside from the cachaça reference, is that you get to see iconic cartoon characters drinking and smoking, which you'd never get away with in the U.S.

According to this post, an iPhone in Brazil is taxed more than a pistol or cachaça.

Now here's a heckuva gift. A (no doubt very good) friend of Flickr member André Elias gave him a bottle of Coqueiro cachaça signed by none other than Neil Gaiman. As he points out, it even made the papers.