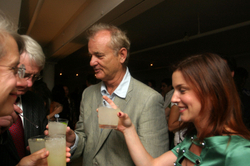 Apologies... Aimee over at Sagatiba's PR firm, YC Media, sent this over and I couldn't help but go for the Lost In Translation reference.

Cachaça's Rising Interest In The U.S. 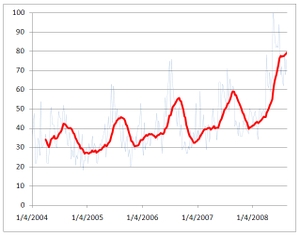 Playing around with Google Search Insights, I wanted to see what I could divine about cachaça interest in the U.S.

Above, you see a normalized-to-100 graph of searches in the U.S. for "cachaça". Clearly an upward, seasonal trend over the past four years, with a significant spike this year.

The truly cool thing about this Google trick is that you can download the results into a spreadsheet and play with the data a little in Excel. The red line is a 14-period moving average of the search behavior, to make the chart a little easier to look at and derive meaning from.

Picked a heckuva time to start this little project, eh?

The picture gets even more interesting when you see what people are searching for and from where. More after the jump.

Cachaça Brand? Media Company? Why Not Both?

No one really wants to watch advertising. To remain relevant, brands need to adopt behavior more akin to media companies, delivering their brand message within content that offers educational, entertainment, or journalistic quality.

This is why I'm very much into what Leblon and Sagatiba are doing on YouTube.

Last week, Sagatiba quietly launched its SagatibaUS YouTube channel, which will evidently be the home for its excellent Premium Side Of Brasil mini-documentaries.

(Earlier episodes were previously hosted on an account named "paulosagatiba". Global Brand Ambassador John Gakuru has some of his own videos up as well.)

Rather than hit you over the head with cloying messages about how great its product is, Sagatiba wants to align itself with everything that is good -- "premium", even -- about Brazil. The first videos posted to the SagatibaUS account offer perspectives from a Brasilian fashion designer, a carpenter, and a chef.

Leblon's content is quite a bit more obvious about its commercial interests, though also appears to be doing a bit more to educate folks about cachaça itself.

They have the Naren and Jacob series, helpful how-to videos, and even a music video that (I'm guessing here) is aimed at getting Americans to pronounce "caipirinha" correctly. (You just have to get past the notion that someone would name their daughter "Caipirinha".)

Heck, they even have a site called, appropriately enough, Cachaça 101, with an entertaining man-on-the-street video of random pedestrians mangling the pronunciation of our favorite distilled spirit.

The point is, both efforts are engaging at different levels. Advertising, in the strictest sense, interrupts -- your favorite TV show, radio program, magazine, city's skyline, etc. Educating bartenders and consumers as to the value of cachaça (and, hopefully, entertaining them along the way) can only be a good thing.

Cabana's Ads: When It Gets So Loud You Can't Avoid It

But, when you're a blog that's all-cachaça-all-the-time, there's an expectation that you'd have something to say about such a widely covered campaign.

First, let me just say that America's Puritan roots are showing a little too much these days. One might think that, decades after pure-as-the-driven-snow Julie "Mary Poppins" Andrews insisted on showing the moviegoing public her breasts, and days after the FCC gave CBS a pass for Nipplegate, that we'd be past all this.

Nope. Not a chance. Alas, there remains this irrational fear. A uniquely American fear of the female nipple that's getting bigger.

On the other hand, I personally tend to find the whole "sex sells" ethic cynical, especially when you're selling a product (alcohol) that, when tied too closely to sex, often results in rather unfortunate consequences in the real world.

Don't get me wrong. I'm not a prude and you're not going to find me hanging out in front of Cabana's importer naked wearing a sandwich board chanting "Spirits Not Skin!", "Cachaça Not Crotch!", or "Tipples Not Nipples!"

However, I'm inclined to pay more attention to a cachaça brand that has more to say about the craft and the product.

Surf over to BlogHer for the best roundup of this campaign I've seen so far, exploring the ads much more deeply than mere reactionary feminism.

One commenter even wonders whether it is the women who are being exploited...

So, I'm not quite one month into the grand experiment I call Cachaçagora, but I'm nevertheless moved to write about the experience so far.

I'd have to say that the project has been quite illuminating. Furthermore, I was quite pleasantly surprised that a few cachaça makers were looking hard enough that they actually found me at this early stage! At every point, even those times when we disagreed, the correspondence has been thoughtful, meaningful, rewarding, and conducive to developing mutual understanding.

Maybe this is the "day's residue" of my day job creeping in, but I've been thinking about some easy-lift ideas that would help cachaça makers with their online marketing and, in turn, help us work together to educate the northern hemisphere about the virtues of our favorite distilled spirit. More after the jump.