Brazil: "Your Produce Alone Has Been Worth The Trip" 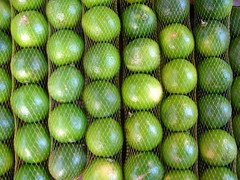 Every time I visit Brazil, I'm reminded of the scene in K-PAX when Kevin Spacey, believing himself to be an alien from outer space, munches on a banana (peel and all) and tells his shrink "Your produce alone has been worth the trip." Any American with more than a cursory interest in the food he buys and eats should feel the same way when he comes to Brazil.

First, let's consider the maracujá or passion fruit. The juice concentrate is easy enough to come by in the US if you know where to look online and off. Whole fruit? That's a different story--it can cost as much as $5 apiece in some metro areas by the time they get to retail. 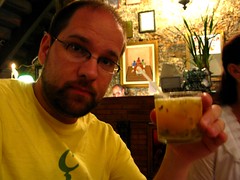 That's too bad, since a fresh passion-fruit caipirinha is, in a word, amazing. (Yes, seeds and all, as you can see from looking closely at the photo above from last year.) Also, when he was with Sagatiba, Jamie Terrell showed Culinary Media Network how to make an Empire Cooler, named for the Empire Hotel in Manhattan. 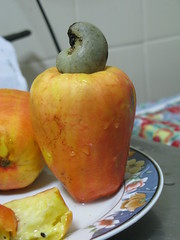 Most Americans would also be very surprised to learn where cashew nuts come from. Rather than grow like, say, the peanut does, cashews are found in the fleshy nib of the cajú fruit (above).

So, there's only one thing to do when presented with an exotic or otherwise new fruit: make a caipirinha out of it! And so I did. Oh yes, I did. 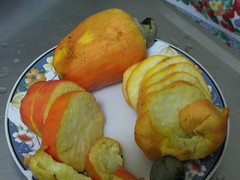 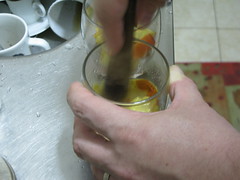 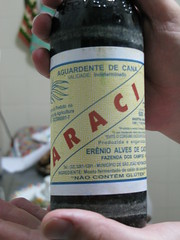 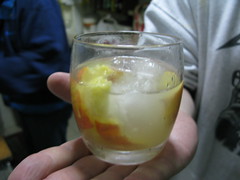 Jim's Chocolate Mission managed to get a hold of a Lindt Caipirinha chocolate bar.

I'm not entirely sure how one can possibly squeeze that much glorious sin into such a small package, but I'm pretty sure the folks at Lindt have the right blueprints somewhere.

Overall the combination of the dark chocolate and lime cocktail fillings made for an utterly fantastic synergy of flavours. I wasn't sure about this combination before I tried it, though on reflection I would have to say this was one of the more enjoyable bars I have had this year.

The filling is said to be 10% lime and 3% "rum". No telling, really, whether Lindt is actually using cachaça. Often, marketers find that just calling it "rum" is easier on northern-hemisphere tongues.

Then again, I'd be willing to forgive this in light of the sheer audacity of delivering a "caipirinha" chocolate bar.