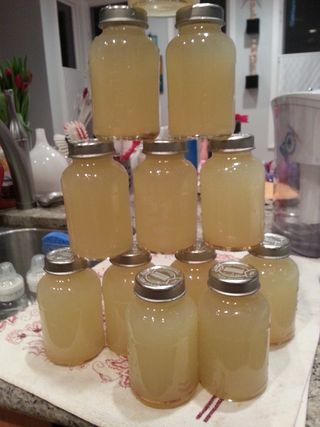 During a backyard barbecue with some dear friends (during the free-time-starved days of B-school), I was introduced to a pretty cool entertaining idea: ready-made cocktails. Our hosts saved up glass Frappaccino bottles from Starbucks, cleaned them, and whipped up various adult beverages for when company came over.

It then occurred to me that the caipirinha is an unusually labor-intensive drink, what with the mixing, muddling, shaking, and so on. Generally, the RTDs or "Ready-to-Drink" caipirinha mixes available at retail are over-sugared, cloying, booze-deficient sludge--basically a liquified Journey ballad. Companies send samples to me, expecting me to faithfully welcome such products with open arms. I've instead decided that the whole RTD category and I had to go our separate ways.

Anyway... When my son's appetite went from cute to ravenous, he graduated from two-ounce travel bottles of baby formula to six-ounce bottles. The upside for daddy was that the bottles went from plastic to glass.

Remembering many a party lost to interminable muddling, I saved every six-ounce bottle of baby formula I could. After a soaking (to remove the label), dishwashing (to remove every trace of the bottles' previous contents), and Goo-Gone-ing (to remove remaining adhesive), and I was left with a little over a dozen bottles.

Now, I had to come up with a recipe. After some (unusually enjoyable, dimly remembered) trial-and-error, this is where I ended up:

Caipirinha purists may turn up their noses at my choice of agave nectar versus granulated sugar or simple syrup. All I can tell you is that you have to try it this way. I started using agave nectar after my daughter started asking for homemade lemonade. She wanted to help make it and the agave was easier for her to handle than sugar. I've used it in my caipirinhas ever since.

You can expect some settling of the nectar and the particles from the lime juice over time. A quick shake before serving fixes this quickly.

This recipe has so far gotten the thumbs up from three Brazilians, including my wife's mom and aunt.