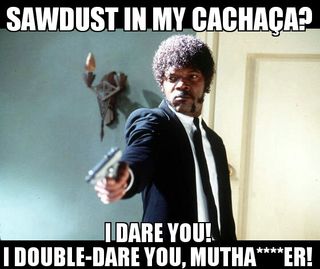 I really do love my aged cachaça.

One of the great pleasures of exploring cachaça comes from experiencing the vast number of woods that a distiller might use to make his or her brand more unique. To date, I've tried cachaças aged in grappia, umburana, amendoim, ipê, balsamo, and (my longtime favorite) jequitibá rosa. This, of course, is in addition to the common carvalho ("oak"). Some distillers even work with combinations of woods in order to bring out interesting flavors, like Magnífica (marketed in the U.S. as Copa).

As with most any other spirit, such aged cachaças often command a premium over their unaged or otherwise lightly rested counterparts. So, you might imagine, there is a high incentive to produce counterfeits.

SecuringIndustry.Com has an interesting piece on how researchers from the State University of Campinas and Federal University of Minas Gerais are looking to combat this problem:

The technique was able to identify the type of wood used in the ageing process as well as detect illegal artificial ageing, according to the researchers.

You read that right: Cachaça counterfeiters are even using sawdust.

The researchers cited a 2001 study that pegged the amount of counterfeit booze in Brazil as high as 50%.

Doing the Lord's work, I tell you.

Knowing nearly nothing about Cachaca, I have to presume that there's a legal regulation disallowing the use of non-barrel oak products? Goodness knows these sorts of practices -- using staves, chunks, and chips of various sizes -- are common in the wine industry, where it's not seen as counterfeiting but as making a budget product.