For Father's Day, my wife thoughtfully got me a creme brulee torch. She had keyed on a offhand remark I made a couple of weeks before, where I expressed a desire to experiment with fire in my cocktail-making.

Watch the news. It'll be epic.

Anyway... I came across the "Flaming Caipirinha" in my feeds today, courtesy of Le Petit Artichaut:

So we’re lighting it on fire to caramelize the sugar before you put it in the drink. It’s a pretty similar method to Absinthe, except you use much less water because you have less sugar.

Head on over and get the recipe. 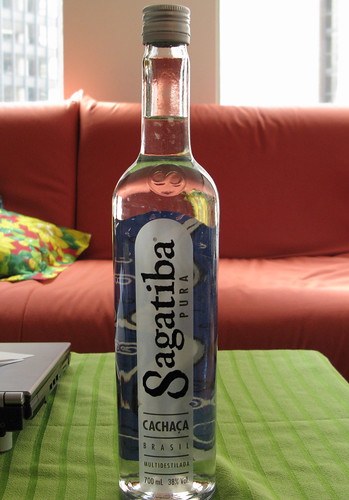 Mercopress catches up with last year's changes to cachaça's legal status, but manages to provide some interesting nuggets nevertheless.

Top cachaça producers and the government plan to pool their resources to fund slick advertising marketing campaigns, particularly ahead of the World Cup, on the model of Colombia's successful coffee promotion drive, he added.

Question: When was the last time you drank something (fun) because a government pitched it to you?

Sounds terrible, doesn't it? Copa's Jason Montgomery walked me through the math. "Light, but in the ballpark," he said, figuring 75,000 cases times 12 bottles times, say, $2.50/bottle gets you to just north of that US$2 million. Then, you figure that even rotgut becomes a $20+ bottle by the time it gets to the U.S.

But, wait... Surely a major brand is going to come to the rescue and be that rising tide that lifts all cachaça boats in the U.S., right?

Cachaça 51, which has a 30% market share in Brazil, "is present on all five continents and represents nearly 20% of total Brazilian cachaca export revenues."

As you've heard me say, there are many things that are going to smother a vigorous market for cachaça in the U.S. Two big ones: