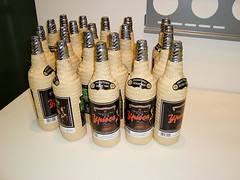 In what is perhaps one of the biggest global bets placed on our favorite spirit, Diageo announced that it has purchased Ypióca (one of cachaça's and Brazil's most storied companies) for 300 million pounds ($470 million).

Some quick thoughts on the news:

It's not a secret that I've never been a big fan of Ypióca, strictly as a matter of personal taste, though I do recognize that this transaction is breathtakingly huge for this category. While the fight to become the Grey-Goose-or-Patrón-of-cachaça still wages—and is not decided by this particular transaction—it would be tough to top this particular deal just in terms of the raw scale involved.

Thanks to Copa's Jason Montgomery, who popped this item into my Facebook feed.

Disclosure: Diageo is a client of my day-job, Edelman PR, though the firm is not specifically engaged in the communication and promotion of this transaction.

I have little doubt that you are aware that many of our beloved Caribbean rums may be forced out of business by the massive subsidies recently received by Diageo and Fortune in the USVI.

I urge all to read author Davin Kergommeuax's article "Rum War Threatens Small Caribbean Producers", in which he interviews Dave Broom about this threat and what can be done...

There is also a petition afficialted with this post, to which Davin and Broom are signatories. Caribbean rum as we know it is at risk of being forced out of business. Unbelievable, but true.

The formal petition is here:
http://www.gopetition.com/petitions/stop-massive-u-s-rum-subsidies-to-the-usvi-and-puerto.html

Isn't about time you helped out?