Tasting Event with Brazil-In-Chicago This Saturday 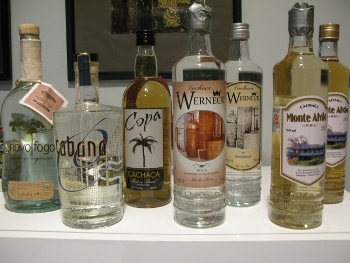 I'm proud to be working with Marcelo Jarmendia of Brazil In Chicago to put together what will be an incredible tasting event featuring world-class cachaças.

The evening will start with my in-laws Cláudia Fernándes and José Alberto Kede, talking about the significance of cachaça, how it's made, and how to appreciate the finer specimens. I'll then talk a little bit about the experience of building this site, what I've learned about cachaça, and what I think it would take for cachaça to succeed in North America.

All told, we're going to taste about eight cachaças from at least five brands, but this could expand in the next few days. Some of the cachaças to be sampled can only be had in Brazil. Fear not, though: at least three have been selected for their current (or, at least, imminent) broad U.S. availability.

As to those available in the U.S., these distillers have generously contributed product to the event, for which they've earned a hearty "saúde!" from your humble editor:

Also thrilled to be sampling Werneck (a high-quality cachaça, from the former president of Volvo Penta Brasil no less, and one of the highlights of my most recent trip) as well as a longtime personal favorite, Monte Alvão.

The event will be in both Portuguese and English, but we'll do our best to make it meaningful for all. We'll also be serving appetizers.

Admission is $30, with proceeds going to furthering Brazil In Chicago's mission to be the midwest's center for evangelism of Brazilian culture. Attendance is strictly capped at 20. RSVP at info@brazilinchicago.com.