Taking a Ride with Emilio Lobato on the Cachaça Express

One of the most rewarding things about running this site has been hearing (and re-telling) the stories I hear from all parts of the cachaça production and marketing value-chain. Readers have heard plenty from distillers, and a bit less from bartenders, but virtually nothing about retail.

Emilio Lobato of Cachaça Express contacted me recently and I interviewed him over email. He started Cachaça Express in late 2010 as "so far, the best reference in Brazil in terms of cachaça selection, content, usability and design." 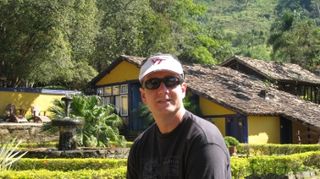 After a cursory browse of the site and its selection, it's hard to disagree. Cachaça Express has everything from Cachaçagora favorites like Coqueiro to life-in-Diddy's-liquor-cabinet fare such as Cachaça Havana, a Playboy-Brasil-lauded tipple that will set you back $R350 (US$211) for a mere 600ml bottle.

You can shop by price (for most of us), type (aged, white, etc.), and (for us real cachaça nerds) region of origin.

Read the interview and find out more after the jump.

What was your inspiration for starting this site?

We actually have had a physical store in the international airport of Belo Horizonte for about two years. The warehouse serving this shop is just in another city in the airport surroundings. Instead of having just a warehouse we decided we could do more with our stock and there came the idea of selling on the Internet.

What are your plans for outside of Brazil?

We are still developing/improving our site. Version “2.0” is coming soon. In this new version there will be more payment and freight options, a chat service to help customers, the possibility of reviewing products and so on. We are also improving our server so the site will be significantly faster. After having the domestic version of the site fully tested and approved domestically, we will go international.

We will have the international site probably in 2012.

What cachaças do you think are going to be "surprise hits" both in Brasil and abroad?

There is a very special brand here in Brazil that I believe is not much well known outside. It is Cachaça Vale Verde. I have visited their alambique many times and I can guarantee that Vale Verde is one of a kind. It is aged three years in oak barrels and is one of the few in Brazil classified as an extra premium product, meaning that 100% of the liquid is aged and not blended. 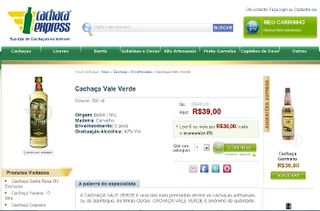 I was entertaining myself by clicking on the by-price navigation on your site. What cachaça in the "Acima de R$200 [Above about US$120]" category has been the most popular? Any sense of who is buying these cachaças?

This is our special line or gourmet line of the best cachaças in Brazil. Please notice at this point that we are still adding new products and searching for the best to be listed online. With more than 6.000 registered brands in Brazil, our portfolio must be dynamic.

Going back to your question, once you taste one of these products you understand that they are different. It is tough to say what their magic is, but I can assure they have something special. Some of them, like the famous Havana, have also a lot of buzz and marketing involving the product but, as a general rule, they are of exceptional quality. Please check the Santa Rosa line of products. They are all very nice.

Tell me about cachaça and the increased attention on Brasil going into the 2014 World Cup and 2016 Olympic Games.

That is a very good question. The government is planning to have cachaça and caipirinha as the official drinks for both events. There is no doubt that there will be a tremendous increase for interest in them. I hope we have the international website well established before the games.

As good as the likes of Leblon and Cabana are, we don't really have a well-aged, high-volume cachaça widely available in the U.S. Why do you think this is? What will it take to get there?

I will try to answer this one, but I believe that the main problem are the taxes spirits have as they enter any country. Artisanal cachaça is naturally more expensive than the industrial one and people outside Brazil just do not understand there is a huge difference in quality between them and so they are not willing to pay the extra price. Besides that, people also don’t know that it is very nice to drink good cachaça [neat] and not only in cocktails and caipirinha. Just as similar as the Mexicans successfully did with their tequila. This is something that must be addressed by local producers and since the marketing costs can be very high I believe that the best way to follow would be having a group of entrepreneurs, cachaça producers, acting in a joint effort to show all the possibilities of cachaça.

I know Leblon and I think they do an outstanding, despite lonely, job.