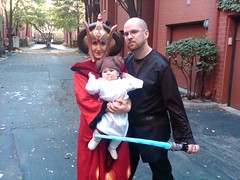 Leticia and I just finished up quite a get-together here at the Gomecile: twelve adults, four kids, about a hundred trick-or-treaters and Lord knows how many handfuls of candy.

I decided the evening needed a signature drink. Something orange-and-black, naturally. So I came up with this. It was such a hit that any time I wasn't passing out candy at the front door, I was muddling-and-shaking. Such a great time, freely handing out sugar and alcohol.

In case you were wondering, I was pouring Leblon and Werneck cachaças.

The Caipirinha is a Hit in the U.S.... with the Tastemakers of the Nineties, Anyway 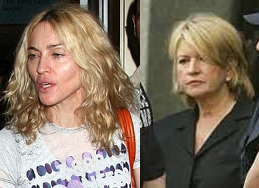 It's tough for me to write this, since you all know my passion for great cachaça and the cocktails you can make with it. Then again, I didn't start this project to be an uncritical cheerleader. I just don't have the gams for skirts like that and, besides, if I hold the pom-poms there's just no way to raise a glass to my lips.

A while back, Leblon mentioned that Madonna told InStyle.Com her favorite cocktail was the caipirinha. (Her preferred take on this classic included Vita Coco coconut water. In any event, InStyle failed to point out that Madonna is a Vito Coco investor, something some simple Googling might've uncovered.)

Today I noticed a blog called The Single Nester, which claimed that the caipirinha was the favorite cocktail of American domestrix Martha Stewart. (TSN provides no citation for this claim, but let's take it at face value for now. Oh, and don't bring up the topic of investing to Martha. Makes her cranky.)

Anyway... Let me break this down for you: All these marketing dollars flying around—with Brazil hosting the World Cup and the Olympics in 2014 and 2016, respectively—and the only celebrities in the U.S. who are thus far on the record as loving our favorite cocktail are... these two? And, in Madonna's case, her interests were probably less about the joys of cachaça-lime-and-sugar than her investment portfolio.

Granted, I might be missing something—I'm a lot more interested in following quality cachaça than who might be drinking it—but... really? Who's next? Right Said Fred? Kris Kross?

"So, you're a PR guy," you tell me. "What's your remedy?" Well, to be frank, celebrity endorsement and consumer marketing just isn't really what I do. (My own role and expertise tends to be more akin to management consulting than publicity, though I work with plenty of smart folks who are, in fact, masters of these disciplines.) I've most certainly appreciated what I've seen in terms of grassroots marketing and word-of-mouth efforts. This blog has benefited greatly from them, in fact! That said, identifying and cultivating relationships with tastemakers today who could be relevant in four-to-six-years' time should be on the "Do It Now" lists of cachaça marketers everywhere.

I know it's been a month since I've updated this site and my return has taken the form of this tough-love post. Hope to be getting back to regularly scheduled programming soon, such as it is.