« Carne with Cabana Cachaça, Cocoa and Coffee | Main | Become a Fan of Cachaçagora on Facebook » 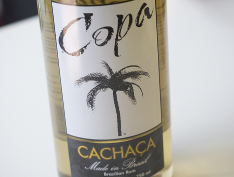 To tell you the truth, I was never envious of the British until I found out during my visit to Magnífica Cachaça that the Las Iguanas chain of restaurants was going to get a private-labeled version of their incredible product. I comforted myself (if only a little) with the notion that the British taxation rules regarding booze meant that they'd get a somewhat alcohol-depleted version. ("And that," I said during a documentary outtake, "is why you people lost the Revolutionary War!")

My sense of American pride and exceptionalism notwithstanding, however, the simple fact was that they could get Magnífica and I couldn't. 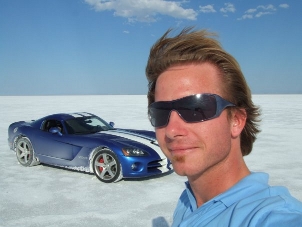 So imagine my relief when Jason Montgomery, entrepreneur and VP of business development of Copa Cachaça, told me that his flagship product was actually Magnífica's Envelhecida. (Process: One-to-two years aged in Brazilian ipê wood, followed by at least two years in oak casks.) Better news: Copa was headed for U.S. shores.

Oh, how I positively gibbered with cachaça-coveting glee!

I had to learn more. My interview with Jason after the jump.

What's the Copa story? How did you hook up w/ Magnífica?

The Copa story started in 2002. I was an airline pilot (just turned 26) flying for United Express based out of O'Hare. On days off I'd pick a country and go. The first trip to Brazil was for a week in July 2002 with my college buddy, Brett Pyka.

The plan was drive to Santos for a day then take the coastal highway to Rio! It took us a while to get out of Sao Paulo, so upon arrival to Santos we checked in to the first hotel we came to on the beach. It was $7 a night. We threw our bags in the room and took off roaming where we had our first experience with Brazilian service.

On the beach, within seconds, we had two lounge chairs, an umbrella, table, and two beers with coolie cups set up for us in the sand. We weren't sure what to think but enjoyed a few cold Skols which just kept showing up in our hands, not having an idea what all this amazing service would cost. The total bill for a couple hours of this was $5. Is this heaven?

The coastal drive to Rio was much longer than expected but has to be one of the most scenic drives in the world. Everyone on that highway thinks they're Formula 1 pilots which is why cars have fire extinguishers under the seat. I love it.

Finally, we made it to Rio and checked into hotel Miramar, threw our bags in the room and headed to the beach. That night Brett and I had our first caipirinhas sitting across from Copacabana's famous beach. I remember it being really powerful and it took me some time to finish. Everyone was drinking these muddled drinks and I'd never even seen one in the states or heard of cachaça. I knew then I'd find the best cachaça there is and bring it to the states. That same week we had a bowl of frozen acai with some surfers. (In hindsight probably should of focused on the acai. Don't know if I'm going to be able to get Oprah behind Copa!)

Over the years we've taken several trips to Brazil in search to select our producer(s). This included a lot of research and a lot of cachaca tastings and of course a road trip to Salinas MG. We'd poll the waiters and clientele of Academia de Cachaça as to their favorite. We toured dozens of estates and would find out which cachaca actual cachaça producers drink and enjoy. There are several quality cachaçamanufacturers in Brazil but few that you can build a US import business of world class spirits around.

Copa's producer, Joao Luiz, has been a natural fit. In addition to trips to the farm, we've had dinners at home with the entire family, and stay in constant Skype contact.

Your current single SKU appears to be Magnifica's "Envelhecida" product. Any chance of bringing the others (e.g., Reserva Solera or maybe one aged in ipê?)

Our complete focus now is on Copa, the Envelhecida product. When the time is right we'll have Reserva, as well as another sipping cachaça. 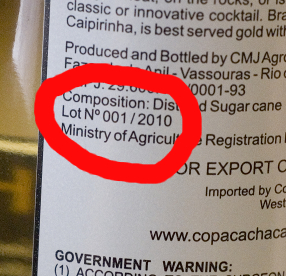 Lot Number 001? Did I get hooked up or what? Photo Credit: Leticia Gomes

When I visited the distillery, I was pretty intrigued by the three-part alegria still. You even bring it up on the Copa bottle's back label. Can you tell us more?

The alembic is heated by steam. We use the sugarcane bagace to produce the steam. (Ed.: I covered this in part six of the documentary. /pmg) Our alembic is almost unique in Brazil, and it doesn´t produce a tail. (Ed. note: In an artisanal distillation process, the early part of the distillate takes the form of a "head", followed by a "heart" and "tail." The head and tail contain impurities and/or very high amounts of ethanol that a crafty distiller disposes. Some distilleries use the head and tail in fuel for service vehicles on the property. /pmg)

Our alembic is composed with three corps. The upper one is only a pre-heater. The other two are identical and in sequence.

We stop the distillation when the quality of the cachaça starts to change (sensorial criteria).

When we decide to stop the distillation the cachaça that is coming out of the alembic it is about 40% alcohol.

The sugarcane wine has yet a lot of alcohol in it. This wine goes to the third part where we extract the alcohol to enrich the wine of the second part. We eliminate the head.

Each batch is 400 liters and takes about four hours.

The first shipment of Copa cleared customs about three weeks ago in Miami. In the past two months we've introduced it to 150 bar chefs and beverage directors in South Beach and another 75 influencers at Tales of the Cocktail.

The feedback has been outstanding. We are making new placements daily so you don't have to search hard in Miami Beach for Copa. The first cases went to Sunset Lounge at Mondrian, Wish Restaurant, and Blue Deco at Marriot South Beach. We're getting menu placement at some really cool places that we'll be announcing.

Several package stores in Miami Beach are carrying Copa and we're suggesting a retail price of $37. This price point is a great value that will allow newcomers to artisanal cachaca give it a try.

In Florida we are set up doing independent distribution. We just received our distributor license in Illinois on Friday so Chicago is getting its first pallet soon.

Certain markets we want to distribute independently but others we'll reach deals with artisan distributors. 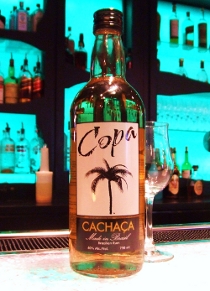 The product is great served neat. What is your favorite cocktail preparation?

I love sipping Copa over a couple rocks (which I'm doing right now). I believe the trend is towards enjoying artisan spirits with character on their own and away from "bubblegum" vodkas.

That being said... The cocktails these culinary types are building with Copa are incredible. My favorites so far are a Copa Sangria (Merlot, lemon slice, lime slice, blackberries, Copa, Cointreau, and allspice) recipe that will be on our Facebook page this week, and the Copa Carousel (our version of the brandy milk punch recipe) is on the fanpage now.

W South Beach mixologist Tommy Merolla made me an old-fashioned-slash-manhattan with Copa that was luxe.

The girls' favorite so far is the Copa Orange Ginger (1 part Copa, 2 parts fresh orange juice, and a big pinch of freshly grated ginger, shake with ice and serve strained). Also, it turns out Copa makes the Ultimate Mojito, just use a little less simple syrup than usual.

If you do make a caipirinha with Copa, strain it into a martini glass; more of the spirit's depth and true character of the cane come through.

Entering into the market with an aged product is a bit unusual, since cocktails (typically based on unaged or lightly aged product) tend to drive volume. What's the strategy here?

Copa is all about a spirit you can sip and enjoy. We're not really interested in being in every caipirinha or doing mass volume. The reception by top mixologists in the US has been highly enthusiastic. They're creating palate-elating cocktails with Copa, so we are interested in being a leading part of the cocktail renaissance that's sweeping the culinary cities. We're promoting the innovated classics using the freshest of quality ingredients.

We have no plans for big fancy billboard fanfare or ad campaigns, just introducing Copa to bar chefs and winning hearts and minds one at at time. We do plan on having some awesome parties and gatherings of spirit afficianados!