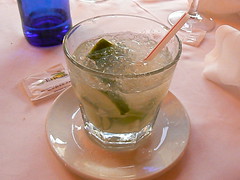 In November 2008, I pointed readers to Brazil's caipirinha law, which sought to strictly "set standards for identity and quality" of the national cocktail by requiring that only cachaça, sugar, and lime be used.

The Guardian now tells us that Leblon has taken this up as its latest cause as the Brazil-market counterpart to the Legalize Cachaça campaign.

"We formally declare that we no longer wish to see our caipirinha being made with vodka or sake instead of cachaça," reads the campaign manifesto, the brainchild of the Cachaça Leblon brand. "We do not accept that this drink, which is famous and respected around the world, be disrespected in Brazil."

Fair enough. In my original post, I looked askance at the law as yet another example of regulators-gone-wild. I still think that marketers, more than government, should take the lead here.

What this effort shouldn't discourage is the use of the basic elements of the caipirinha (alcohol, sweetener, fruit) as a mixology test bench. Define a "caipirinha" as cachaça, sugar, and lime, yes... but don't mess with my Succubus Kiss Caipirinha.

Apart from technique, the caipirinha fits squarely in the sours category, so while it may be right to give that particular combination a specific name, it's not as if there aren't countless sour variations out there. That a daiquiri nominally has a particular formula hasn't stopped the creation of all sorts of modifications, some probably without a drop of rum in them. Heck, I've even seen tiki drink recipes without rum in them. And that just seems weird.

Thanks for pointing me to the Brazilian decree on what constitutes a caipirinha! Bureaucracy gone wild. I've linked to you on my blog, Flavors of Brazil. Obrigado!