Tiare shares an interesting find, Reina Das Gerais, which she describes as an "artisanal cachaça distilled in alembic copper stills and aged in oak barrels for 5 years."

The texture is like velvet in your mouth. The finish is sugarcane and a hint of earth and oak. Actually a sip of this floods you with pleasant flavours. Its very very smooth but does still have a bit of fiery kick, perfect.

Oh my luck! i have a rare premium Cachaça here!

One thing that Tiare has picked up on is the vast variety of cachaças out there. When I have guests over, they're often surprised as to the very different flavor profiles that each of them have, sometimes with few threads of commonality between them.

The more cachaças i try the more surprised i get as to how varied they are. So then to think that there's about 5000 brands or more in Brazil its kinda mind boggling. I really would like to see more of them being exported. I`m especially interested in the artisanal cachaças, and i think artisanal is the way to go.

Looks like yet another one I'll have to try to track down...

Because All The Good Names Are Taken, Even In Portuguese

They say that some cultures have a lot of names and shades-of-meaning for the things that matter most to them. Many of us have heard the legend (largely bunk) that Eskimos have dozens of different words for "snow", for example.

Suitably, then, the Brazilians have more than a word or two for "butt" — popozão, traseiro, bum-bum, bunda, pandeiro...

When I was visiting in 2008, "Mulher Melancia" ("Watermelon Woman" née Andressa Soares) had apparently taken the country by storm, really for no other reason than a prodigious posterior.

(Perhaps not unlike our own J. Lo, Vida Guerra, Kim Kardashian...)

Anyway... Today, I learn about Cachaça Na Bunda. Basically, "cachaça in the butt" made from cana grossa ("fat cane"). 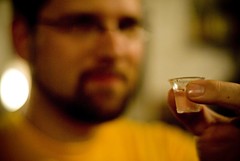 Here we have a very special installment of my 2009 Cachaça Tour documentary — a trip to Barril 39. Some of you may remember Barril 39 as the winner of the first blind taste test I held a little more than a year ago. 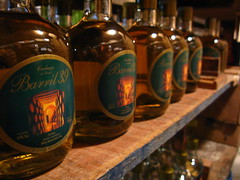 This tiny operation, passed from late father to son, is undergoing a period of transformation and renewal. The horse-powered cane-crusher atop the hill will be replaced by a modern electric one. New structures have been erected to handle each step of the cachaça-making value chain — crushing, fermenting, aging, bottling — whereas a very small room handled most of these tasks before. Further, each building stands lower on the hill than the next, making gravity do some of work for the small distillery. 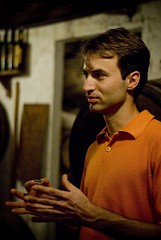 All of this said, the old setup is a wonder of homespun ergonomic ingenuity. Proprietor Sérgio Azevedo's father originally arranged everything such that he could run almost all of the operation from his wheelchair. The fermentation tanks, for example, are smaller than usual and raised well above the floor, connected by a network of pipes and valves set within easy reach. 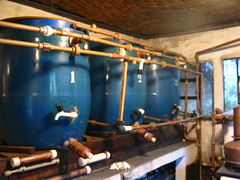 Of greatest interest is the product I have yet to taste: Sergio sent me home with a bottle of Barril 39's one-thousandth distillation, carrying the old "Terras Altas" label, from which only a few liters exist. 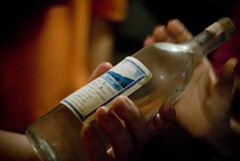 No, you can't have any. However, please enjoy the video and the slideshow.

'Cause You Gotta Have A Hobby

My interest in cachaça over the past year-and-a-quarter has yielded quite a collection, so much so that my wife has suggested I buy a cabinet for it all. A quick trip to IKEA and here we are:

Generally speaking, the aged cachaças are on the left, the white ones kept on the right along with the flasks and literally dozens of airport-sized bottles. 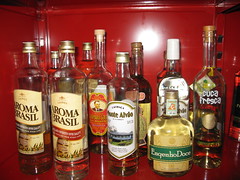 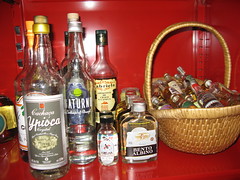 However, the pictures don't even tell half the story. Here are some prized components of this collection:

Enjoying some Monte Alvão as I write this.

What is a calamansi, you ask?

Well, it's a hybrid citrus fruit that plays a role in Filipino cuisine.

Calamasi’s taste in between a kumquat and a tangerine. They are very sour with a subtle sweetness, so they this drink has a good balance between sour and sweet without having any hint of syrupyness.

Bring this southeast Asian fruit together with our favorite cocktail in honor of Rio 2016, and you have some interesting trans-continental flavor potential.

Thing is, this recipe is more than just a little a bit watered down for my tastes (four ounces of water and an optional half-teaspoon of cachaça, for chrissakes?), however, I give bonus points to anyone who introduces me to new and unusual ingredients. If you can get your hands on calamansi, I'd definitely encourage of-age readers to try a more "leaded" version.

Squeeze the calamasi juice into a small glass, then add the granulated sugar and mint leaves. Using a spoon mash the mint leaves into the sugar. This wil also help the sugar dissolve. Add the shot of cachaça, then the ice cubes. Next fill the glass with water and stir. Serve immediately. 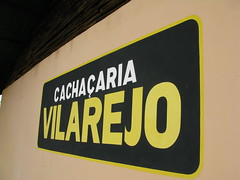 It's helpful to think of this part of the cachaça tour as a bit of an intermission. Why? Well, you'll find out in the video. 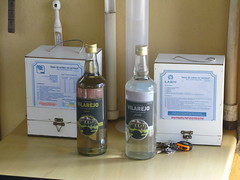 Vilarejo cachaça was the first one served to me by my in-laws upon arrival in Brazil this time around. I was impressed.

What's been interesting to observe is how various distilleries make use of the bagaço ("bagasse" in English), which is the fibrous waste product that's left over from crushing the cane. Vilarejo uses it as fuel to heat the alembique. Maria Izabel turns it into fertilizer for the cane fields. Magnífica (coming in part six) burns it to fire their steam engine.

As for the rest, see the video and the slideshow.

Leblon Has A Rio 2016 Cocktail, Plus Consolation Caipirinhas

Leblon is celebrating Rio's 2016 Olympic win with a green-yellow-and-blue take on the classic caipirinha — a lemon-lime version. Was hoping that it was an homage to the color scheme of this site but... yeah... they're probably using the Brazilian flag for inspiration.

Leblon has developed other caipirinha variations — one for each remaining candidate city.

Most intriguing are the versions for Tokyo (using sake and lychee puree and Spain (with chili and cilantro).

Check out the latest edition of Leblon's newsletter for the recipes.

The IOC members in Copenhagen weren't yet finished laughing at our 2016 Olympic bid by the time Cabana Cachaça had cocktail at the ready to celebrate Rio's win.

Combine all ingredients and serve over ice in a rocks glass

Now... What I really want to know is whether 1) they had a recipe at the ready for each of the four candidate cities, and 2) I can get my hands on those recipes!