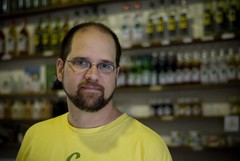 As many of you know, I was fortunate enough to enjoy a five-day, six-stop tour of artisanal cachaça distilleries around Rio de Janeiro state in August. The result is a multi-part video travelogue that I will eventually post in its entirety.

This spirit of this work, of course, is the same as the one that governs this blog: I don't presume expertise, but I hope to provide an online platform for the shared exploration of Brazil's national spirit. (I'm also not a pro broadcaster... clearly!) 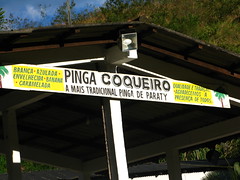 My first stop was Coqueiro, which I first learned about early in this blog's development. My Flickr-scanning uncovered a bottle of one of their flavored products, signed by Neil Gaiman.

I can give you some background information on Coqueiro:

It's a cachaca from Paraty, they call their distillate 'Pinga' (english: drop) there.

Coqueria sells a lot of cachaça's with flavors like pineapple and other fruits. The one in the picture is probably a 'caramelizado' flavored with syrop.

Paraty is traditional town on the green coast 150 km from rio de janeiro city with a great tradition for cachaça, they still have a dozen traditional distilleries (alambiques). Yearly they have their pinga festival.

Coqueiro introduced me to a cachaça variety known as azulada. Essentially, it involves adding tangerine tree leaves to the fermented cane juice during the distillation process. This leaves the cachaça with a light citrus taste and, when the light hits it just right, a heavenly blue hue. 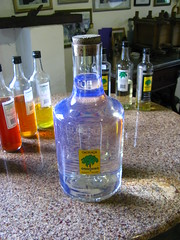 They sent me out to my next stop with a complimentary bottle in-hand. Let me tell you: making a caipirinha with this stuff is amazing. A ton of other possibilities, though my limited stash prevents me from doing too much experimentation. Little chance of me getting an azulada hook-up in the U.S., unfortunately, so I'm going to have to make my liter last. 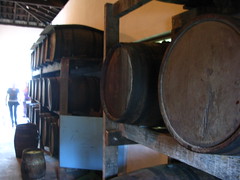 For aging the cachaça, Coqueiro principally uses two woods: the familiar oak and the more unusual amendoim. The latter (literally "peanut" in English, but with no real relationship to the actual legume) imparts minimal color and flavor characteristics to the cachaça. Ipê barrels are also often chosen for this reason.

Enjoy the video and the slideshow. All slideshows will feature both my photos and my wife's.

Nice job on the video. Looking forward to your next installment.

I was drinking Cachaca cocktails at a very nice bar in Ashland, Ore., last week before an evening of fantastic theatre at the Oregon Shakespeare Festival. Either way, there's nothing else like it!

Can´t wait for the next post on this series!

It´s great that you got to go to Paraty! It´s an awesome place, isn´t it? Especially for people that appreciate cachaça.

When I saw the Azulada I first thought it was Tiquira – another Brazilian spirit only common in Maranhão. They both share the same color but in the case of Tiquira it´s mainly artificial, as far as I can tell. – Great info on the azulada, I have to sort a bottle ASAP!

I haven´t really seen any bottles of azulada around here. I´m not even sure if other producers make it…
Did you see also azulada made by other producers?

Thanks for stopping by! Glad you liked it.

Good info on the region. Speaking of "Estrada Real", have you seen this?

Good tip on the aged cachaca. Seems that almost all great things come to us by accident.

As to azulada, I saw it offered at Engenho D'Ouro and Maria Izabel as well as Coqueiro. (Incidentally, those are the next two installments, though I chose to feature other aspects of their operations.) I'm not surprised that you can't get it here, but I'm pretty certain that the craft-cocktail crowd could definitely get into it.

Interesting post and great video Phil! That bottle of azulada is very interesting, it must taste wonderful.

I find it very interesting they use tangerine leaves in it.

I do wish that I could find some way to get azulada up here. As it is, the stores only really carry three or four brands at the most, and none of these brands likely see a volume opportunity in this variation.

@caipiman: Ha! We might have even passed each other on the streets of Paraty!

It´s possible :-) I stayed till the "Festa da Pinga" .... tasting all the different kind of cachaces produced in Paraty in one place :-)))