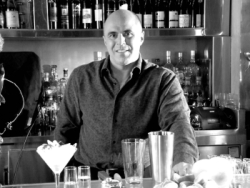 Now based in Vegas and running his own beverage consultancy focused on cocktail development and bar staff training, Tony is known around my old stomping grounds for his signature drink, the Cable Car, which he created for the specialty cocktail menu at Harry Denton's Starlight Room high atop the Sir Francis Drake hotel in San Francisco.

In his capacity as a consulting mixologist with Leblon, he took some time during his trip to New York and chatted with me about cachaça, the recession, and his advice for bartenders. You'll also want to watch the Leblon-filmed video at the end to see some of the techniques and recipes he describes in the interview.

What was your first encounter with cachaça?

I had first moved to New York City in '93 from San Francisco. I had never heard of cachaça. I was working with Mario Batali at his first restaurant Po, which was down on Cornelia Street in the Village.

For the life of me, I can't remember the name of the place, but it was a Sunday afternoon, I had just broken up with my girlfriend and I was walking down Halston Street, and I heard this wonderful Brazilian music just exploding from a downstairs bar. So, being the curious-natured sort that I was, I walked down the stairs. There was this fabulous bar with this great party and this live Brazilian music, and I was introduced to this drink called the caipirinha, which I'm sure I didn't pronounce well at all. And it was made with this product called cachaça. All I know is that it was really delicious, and I don't know if it was the music, the dancing, the cachaça, the mood i was in, but it was just so much fun... Just a really fun buzz. I also remember a wicked hangover the next day.

Dear Lord, what cachaça did they give you?

[laughs] Well, remember this was 1993! I have no idea what it was. I'm sure it was an industrial cachaça.

I just remember having so much fun. It was just the whole vibe. And that's what I get excited about -- not just the cachaça, but the whole lifestyle. I was just in Rio and went down to Leblon beach. I was just blown away by the whole approach to life and the whole culture -- it's not "living to work" but "working to live" and enjoying life.

What do you think is cachaça's opportunity here in the U.S.?

Well, because of that experience in New York, when I returned to San Francisco in '95 and we opened the Starlight Room with Harry Denton, I put together the specialty drink menu there. It had such a great impact on me that I put a caipirinha on the menu for a while at the Starlight Room, really with very little knowledge of what it was.

Keep in mind... Even 13-14 years ago, this whole cocktail thing wasn't anywhere near where it is today. So, a caipirinha on a cocktail menu back in 1995 in San Francisco was kind of an oddity, outside of maybe a Brazilian restaurant. And it was very well-received. I think it was Pitú that was the cachaça that we used. Maybe [Pirassununga Cachaça] 51 was also around. Those were the only cachaças that you could find. At that point, I knew very little about cachaça but I did know the caipirinha and I did know it was a fabulous drink and people really gravitated towards it.

I have to say that all ships rise in a high tide. No one in the cachaça category really has the budget to become a Grey Goose. I think that Leblon and anyone else who is playing in this category would benefit from educating people on cachaça.

The great thing is that cachaça has its vehicle in the caipirinha, just as tequila has the margarita and rum has its daquiri.

Still, the American consumer is hungry for knowledge. In the 28 years that I've been working in bars, there's never been as much focus, attention, and curiosity about cocktails as there is right now. I was just at Clover Club in Brooklyn last night, and all these twenty-somethings were sipping on cocktails. When I was in my twenties, everyone was drinking beer. It's really neat to see this swing.

As consumers become more educated and gain more knowledge, they'll become more demanding. It'll be nice when you order a caipirinha and the bartender asks you "Do you have a preference in cachaças?"

When you introduced the caipirinha at the Starlight Room, did you do any kind of variation?

We actually kind of simplified the caipirinha on that menu. We did the same proportions but, instead of muddling the lime, we hand-extracted the juice from a half-lime with our hand-squeezers and used simple syrup [instead of sugar], shaken, strained over ice, and garnished with a wedge of lime. That was 1995 and I couldn't tell you why we did it that way, but it made a beautiful drink. If the limes are cut wrong when you make a caipirinha, you get all that pulp and it doesn't make for a clean drink. The way you cut the limes is important and if you over-muddle or get some of the pith into the drink, it can make for a bitter note. Today, obviously, I teach it in the traditional fashion. [Ed. note: You can see Tony's technique in the video he did for Leblon.]

How did you hook up with Leblon?

Long story short, I worked with Tim Jones [former Leblon managing director] many years ago when he was at Moët Hennessy during the early development of 10 Cane Rum. [Ed. note: Leblon founder Steve Luttmann was at Moët Hennessy just prior to starting Leblon.] This led me to be introduced to Jaime [Keller, Leblon director of marketing], then Steve [Luttmann], and later Gerry [Schwitzer, Leblon co-owner and COO].  They were working to not only elevate Leblon, but bring a greater understanding and awareness to the cachaça category.

Anyway, I met Steve at the New York bar show and I thought [Leblon] was very unique. At that point I really didn't understand the artisanal cachaça category as I do today. It was kind of like the first time I tasted 100% agave tequila. Up to that point I was thinking that Cuervo Gold was as good as it got. Then I tried 100% agave and said "Woah! This is a different animal altogether." And that's pretty much the experience I had with Leblon because, up to that point, the only experience I had with cachaças were of the industrial-style, mass produced variety, which certainly have their place and their character; I'm not going to pass judgment here, of course. But then you try an artisanal cachaça like Leblon and, again, a completely different animal.

Since decamping San Francisco for Las Vegas in 1998, this would make the current recession your second since that move. From what you're seeing, what's different this time around?

People are a lot more cautious and there's a lot more uncertainty. We've gone through this kind of sense of make-believe, and Las Vegas enjoyed that more than anyone; home prices and disposable income being where they were, cocktail waitresses buying three or four homes. It got kind of "fairy tale" with people using their homes as ATM machines.

People are still coming, of course. They still need to go out. Unwind. Escape. It's just that maybe they're going out to one nice dinner as opposed of three, one show instead of two, staying three nights as opposed to five, playing red and green chips instead of black chips,

In good times or bad, though, people generally find money for a drink. My cousin Helen David (pictured at left), who taught me to be a bartender, worked with her mother in 1937 to turn an ice cream parlor into a saloon. She was 20 years old. It was three years after they repealed prohibition and Helen told her mother "Mom, proper women don't run saloons!" Her mom says "A woman is a woman no matter where you put her, but she's gotta have a buck in her pocket."  Her mom knew that, in the Great Depression, people weren't going to spend their money on ice cream but they were going to spend money on booze. She ran the bar for nearly 70 years before she died at the age of 91.

So, what have you been doing lately with cachaça?

Well, aside from the caipirinha and the vast variety of fresh seasonal fruits you can use in that drink, I'm really excited about batidas. I'm kind of on a bring-the-blender-back kick, 'cause I think the blender has gotten kind of a bad name behind the bar. Obviously, in classic cocktails, there's very little use for the blender other than making fresh-fruit purees.

In the case of the batida, you again have a pretty simple, basic recipe that lends itself to virtually any fresh-fruit combination. So I've been trying to get people to explore batidas. I do a great coconut batida, also banana, passion fruit, and combinations of flavors. When I was in Brazil, I discovered the cashew fruit, which was fabulous in a batida. I've also made a peanut batida.

Everyone has to look at their [specialty cocktail menu] concept and see what fits and what works, but virtually any pool bar should be making batidas, in my opinon. It's a delicious frozen beverage that doesn't have to use artificial and imitation mixes or come out of a slurpee machine.

I keep telling people, "Don't fight Mother Nature." When Mother Nature gives you great strawberries, use them. In the summer, when you've got great watermelon, honeydew, and canteloupes, use them.

Anything you'd like to leave the Cachaçagora audience with?

I would encourage mixologists, whether they're looking at Leblon or cachaça in general, to not only experiment with the caipirinhas and the batida, but also utilize Leblon in other ways beyond those two drinks. It really does lend itself to mixability with fresh seasonal fruits, anything from a sour-style drink to a cooler to a collins and it'll complement berries and stand up to mangos.

What I always teach people is to master the classics. Like the "Five Mother Sauces" in cooking, once you understand the basics it becomes very easy to try variations and come up with something new. I also believe that if you get a great strawberry, for example, you don't have to do too much to that strawberry.

People have to remember that the most important ingredient is the guest and, in many ways, they're learning along with you. The point is to educate, not intimidate.

As promised, here's Leblon's video of Tony at Leblon beach, mixing a caipirinha and a few batidas.