Just In Time For The Super Bowl: The Bloody Carioca

To some Super Bowl fans, drinking anything other than beer during the game is pure blasphemy. Let those nay-sayers swill their watery brew from cans, we plan on making cocktails for our Super Bowl party.

Thus, he brings us the Bloody Carioca:

Bloody Carioca
Shake all the ingredients on ice and pour into a highball rimmed with paprika. Stir well and garnish with a slice of cucumber.

During Mixoloseum's Thursday Drink Night on Jan. 22, the theme was Mata Hari Absinthe. (See Lance Mayhew's review.) So, catching up on my feeds early this morning (do you know I subscribe to 850 of them?), I noticed a recipe on the Mixoloseum Twitter attributed to Matt "RumDood" Robold.

Shake with, and strain over, ice. 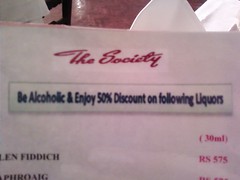 Rick "Kaiser Penguin" Stutz appears to be on parallel tracks with my best friend Richard and me with regard to Boca Loca. (This brand, you might remember, got three-and-a-half barrels in my review and took a strong second place in a blind tasting administered by my wife.)

Perhaps echoing our own evaluation:

I can’t get over it. This stuff smells so damn good. Boca Loca Cachaça’s aroma is earthy and vegetal with loads of caramel. A tip to the tongue reveals not a firey spirit, but one smooth and extremely drinkable. I’m almost a little disappointed at this, wishing that more of Boca Loca’s funky aromas came through when imbibed, but not that disappointed, as I can’t stop picking up my glass to take sip after sip.

Indicating a frustration with the overuse of muddling as a preparation technique, Rick put cachaça, grapefruit bitters, and pectin together to create "solid cachaça".

Mix all ingredients in a small saucepan and bring to a simmer for one minute. Pour into a small ramekin or any dish where you can get the liquid about 1/4″ high. Chill in the refrigerator for an hour or so until it gels. If you want to speed up the process, chill the ramekin in a ice-water bath, pop it in the freezer for 10 minutes, and then in the refrigerator until you’re ready to make the drink. When solid, cut around the edges of the dish and plop the solid gelatinous block onto a counter. Cut into 1/4″ cubes. This recipe makes about 2T of cubes, enough for two drinks.

Far from being just a kind of "jello shot", Rick's creation figures into this muddle-free recipe:

Patriarch of the Forest

Shake all but the cubes with ice and strain into a chilled cocktail vessel, preferably one carved by hand out of a jequitibá tree. [He explains why in his post.] Top with the cubes. They will float. Garnish with whimsical fancy.

A hearty hat-tip to Cocktail Conversations, who shared these two Cabana-based cachaça cocktails in time for the inauguration.

The theme, of course, is "Red, White, and Blue". Cachaça figures into two of them.

I'm still on the road, working out of the day job's Mumbai office. Thanks to this office's GM (the inimitable Roger "Mr. P" Pereira), I'll be taking in the inauguration at an event sponsored by the U.S. Consul General and the Indo-American Chamber of Commerce. Just one more incredible experience in what's turning out to be an absolutely mind-scrambling trip.

The coolest thing about this cartoon, aside from the cachaça reference, is that you get to see iconic cartoon characters drinking and smoking, which you'd never get away with in the U.S.

Updates will likely be scant as I'll be (literally) traveling all the way around the world: Chicago, Beijing, Mumbai, and back to Chicago.

Will there be cachaça? We'll see. 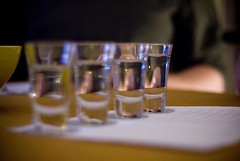 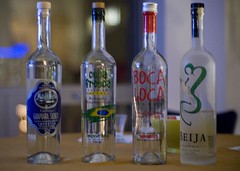 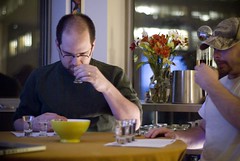