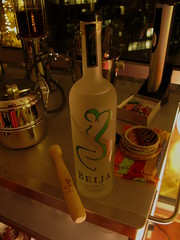 Excellent blog, Phil! Congrats! I wish my dad could read English. He loves cachaças from Minas, specially Januária. Do you have ane review on Januária.