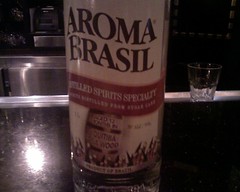 I will have to look for this brand now, thanks!

Re: wood- I have heard that not all Brazilian woods are approved for food use in the US and perhaps this is the reason we don't get as many on our shelves? Other than balsam the only other funky wood cachacas I've noticed are the ones imported by Beleza Pura:
http://www.belezapura.com/aged-artisan-cachacas

I agree, the different woods are a refreshing change from oak.

Thanks as always for stopping by. Always a pleasure.

Good luck finding either variety of Aroma Brasil. It's been in the hands of two distributors this year. I did hear something about possible availability in Germany. As of right now, it's available in one restaurant in Chicago, a liquor store in Skokie, and various places in Florida.

Haven't contacted the Beleza Pura folks yet, but I might have to.

Interesting about food regulations and wood. I do know that some woodworkers are discouraged from working on certain woods except in the most highly controlled conditions, for fear of the particular effects of the dust.

Boca Loca and Cabana are also aged in jequitibá barrels.

thanks for doing this!! i've fallen in love with caipirinhas but I have no idea what kind of cachaca to buy when i go to the liquor store. this one sounds wonderful if i can find someone who distributes in my area :/
would you mind reviewing the regular ypoica, agua luca, pirrassunuga, etc. that i could find at total wine or abc or (insert everyday liquor store here)? it looks like leblon is my best bet for now...