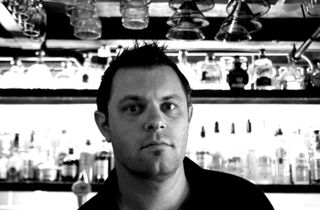 Noting my interest in cachaça cocktails for the holidays, the folks at Boca Loca sent over some recipes (PDF) from Jeffrey Morgenthaler, who is serving as the brand's consulting mixologist. Jeffrey is the bar manager of the Bel Ami Lounge, as well as the founder of RepealDay.Org and the Oregon Bartenders Guild. Chances are pretty good that, if you're reading my blog, you've followed Jeffrey for some time.

I was curious as to how the Jeffrey/Boca-Loca relationship came about. Jeffrey — who I can only imagine is crushingly busy — graciously took the time to answer my questions. See what he had to say after the jump.

How did you hook up with Boca Loca?

I met [chief operating officer] Rhonda Follrath of Boca Loca at Tales of the Cocktail this summer. She and I talked a bit about the mixability and flavor profiles of different cachaças, Boca Loca in particular. I shared with her some of the ideas that I'd been experimenting with back home at the bar, and how I'd used Boca Loca in cocktails over the past year. Later that summer, she approached me about coming up with some drinks that would showcase Boca Loca's beautiful flavors and superb mixability.

What, in your view, makes Boca Loca unique among the cachaças being introduced in the U.S.?

One thing I like about Boca Loca is the wonderful stone fruit flavors that I get on the palate. Flavors like peach and apricot really resonate with my palate, and I've found Boca Loca really easy to work with as a result. Plus, it's one of the more well-rounded, soft cachaças out there and I think that's a testament to the skills of a master distiller.

Are there any stories behind how you came up with some of these cocktails?

When I think about the stone fruit flavors that I find in Boca Loca, I start thinking about a more European set of flavors and less of a tropical beach-type drink. The inspiration for many of these drinks came from me trying to approach these flavors as one might an eau de vie rather than a rum. And I think it shows in the cocktails themselves.

I'm particularly fond of the Que Calor. I made myself one at home just the other (cold) night and had to go back inside for seconds. ;)

Here's the recipe for the Que Calor. Enjoy!

For the cocktail: In a saucepan, microwave, or espresso steam wand, heat syrup, lemon juice and apple cider until hot. Add Boca Loca and serve in a warm Irish Coffee glass. Garnish with a generous slice of orange peel.