Yes, it helps me rationalize the time I put into this site when I can claim that cachaça matters on the world stage.

The Ministry of External Relations of Brazil and the U.S. Department of State held the third session of the Economic Partnership Dialogue on October 29 and 30, 2008, in Brasilia, to further strengthen and expand economic and commercial cooperation between the two countries. This meeting built upon the positive results of the first two sessions, held in Brasilia on December 13, 2007, and in Washington, D.C., on March 5-6, 2008.

The interesting part: Cachaça's stateside recognition as exclusively Brazilian is not in question. The matter at hand: Does bourbon deserve be similarly recognized as exclusively American?

The U.S. side reiterated support for the recognition of cachaça as a distinct Brazilian product in the U.S. market and presented an update on recent developments on the issue. The Brazilian side reported on possible ways of addressing the more recent U.S. request related to Bourbon and Tennessee whiskey.

Variety Has More On "The Royal Road Of Cachaça"

Variety has a brief, mostly positive review of the award-winning documentary Estrada Real da Cachaça ("The Royal Road of Cachaça").

The road of docu's title was an Indian track going from the heartland to the coast; the first Portuguese colonists used it to transport minerals as well as the cachaca they invented. With creative lensing, Urano shows the alcohol's use in daily peasant life: It keeps overworked washerwomen happy and is also used in religious rites. Oddly, helmer bypasses the drink's recent enormous shift from mere moonshine for the lower orders to glam jet-set cocktail.

Naren Young — you may know him from Leblon's Naren & Jacob vids — offers up five new cocktails, complete with food pairings.

And with only four-and-a-half hours left in the weekend. Drat.

Sagatiba appears to be doing a particularly good job of developing and sharing cachaça-based cocktails for the Fall season, something I mentioned in the most recent State of the Spirit post. Enjoy!

"Chef Mark" Tafoya comes through again with another cachaça cocktail recipe, this time featuring Leblon and the quite misunderstood absinthe, masterfully mixed by Junior "The Liquid Chef" Merino.

Longtime readers might remember the Sagatiba video feature Mark did in July.

You'll also want to check out another cachaça/absinthe recipe, Summer in São Paulo.

I'm starting to find more food recipes out there featuring cachaça. This one for a banana caramel dish sounds amazing:

Heat the sugar until it caramelized, add butter, and gently stir.

Add bananas, and mix it well, then add cinnamon and clove tree [powder]. Keep on cooking until [mixture has] penetrated.

Add your favorite liquor, mine is cachaça, gently stir. And ready to serve.

If you remember, diligent Flickr scanning got me the scoop on Abelha cachaça, which is currently a side project of London's Anthony Goh.

Anthony showed up in the comments to tell us that the official Abelha site is now live.

Most interesting is the site's description of the various imperatives for organic cachaça. As you know, the intersection of cachaça and social responsibility is a favorite topic of mine, particularly given the increased international attention on Brazil right now.

To this end, Abelha has gone so far as securing certifications on the export and import ends: Brazil's Instituto Biodinâmico (IBD) and the UK's Organic Farmers & Growers (OF&G).

And, if Abelha's environmental and human-rights arguments aren't enough for you, there's always this one:

There’s a growing school of thought that says organic wines and spirits give less severe hangovers, as there are less odd chemicals in them. We’re happy to believe this, but in the name of good science, we will continue to experiment by drinking almost daily until we have collected enough results to make a statistically robust claim.

Hey... Whatever makes the case!

Two Of My Favorite Things 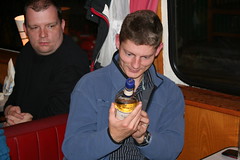 Caption reads "Look how Christoph is smiling at the bottle of Cachaça ;-)"

I have to admit... I wanted so much to not like VeeV, the açai-based liquor. After all, açai is this year's pomegranate and currently an Oprah fave.

However, a bartender at De La Costa generously gave me a sample and, well, I was quite impressed. Lots and lots of possibilities.

Muddle the mint and ginger then combine 1.5 oz VeeV, 1.0 Beleza Pura Cachaça, the juice of a lemon, a touch of agave nectar and ice in a cocktail shaker and shake. Strain into cocktail glass, and squeeze an orange peel over the drink. Next, make a reverse 'boat' with the peel, drop in pith side up, and squeeze a few drops of ginseng into the boat.

Traveling In The Middle East This Week

There will be few if any updates this week, as I'm in Dubai on business. Cachaça-related postings will resume once I return. Cheers!