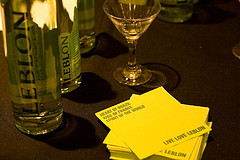 For those of you who (for whatever bizarre reason) follow my Retail Watch updates, one thing is clear — it's tough to get away from Leblon if you're looking for cachaça at the liquor store.

This is one of those incredibly rare instances where such ubiquity is a good thing.

I first tried Leblon about a year ago. My then-fiancee-now-wife had introduced me to cachaça the year before. Forbes had just run an article on Leblon founder Steven Luttmann and even took a stab at a blind tasting. I picked up a bottle at the Jack London Square BevMo and brought it on the annual father/son fishing trip that summer.

Unfortunately, I was without limes, as was the local general store. The store did have lime juice, though — the kind in the tacky-looking, lime-shaped-and-colored squeezy bottle. With that and some sugar, I invented the gringorinha. Stirred, not shaken, with whatever implement happened to be at least visibly clean in our utilitarian kitchen.

I was hoping the bottle of Leblon would last all four nights. It was gone in three. I had help, though... That is, repeated and, I'm quite certain, when-Phil-wasn't-looking help.

The fact is, I rarely felt the need to employ my MacGyverized gringorinha technique. Leblon, perhaps owing to its aging in XO Cognac casks, is also excellent when consumed straight. A dose at lunch and maybe a couple at dinner were perfect. 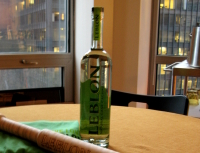 Of course, Kennedy Meadows is hardly the semi-controlled environment that is the Gomecile's Tasting Lab. The digitally vigilant folks at Leblon happened to find my humble blog — they were one of the very first to do so, actually — and sent over a bottle for review.

You can't help but appreciate the extreme drinkability of this product. The care in the distillation and aging processes really comes through in the featherlight smoothness and the cane-rich aroma. You'll want to hold it in your mouth for a while to fully appreciate all of the richness — light fruity notes with just the right bit of "earthiness" that some cachaça makers seeking northern-hemisphere markets try their best to soft-pedal. With this summer's farm/distillery purchase of what is now called Maison Leblon in Minas Gerais, one can only assume that Leblon will have greater control over its product. (At the time of the Forbes feature, Leblon cachaça was a kind of "hacker" spirit, fermented and distilled in Brazil before getting shipped off to France for aging.)

My hope is that, at some point, Leblon will create and offer other cachaça varieties under its label, as many of its competitors currently do.

Four strong barrels for this one. As an introduction to cachaça, especially given the scant and often disappointing selection in our liquor stores, Americans can do a hell of a lot worse. (I mean, I read about the cachaças some of you drink on Twitter. Jeez...)

Hi Phil, thanks for blogging my picture. I took it at a Rosa Cha fashion show sponsored by Leblon. The caipirinhas were excellent:
http://flickr.com/photos/adc/sets/72157600001523061/show/

I agree cachaça and caipirinha could have as bright a future here as tequila and margaritas. Speaking of which, I've never had a frozen caipirinha, I wonder what that's like?

We've got a few contacts/friends in common, including Leah Jones. Please let me know if you're ever in Miami.

By the way, I'm jealous you went to Brazil, I'm hoping to visit my family there in a couple of months ;)

Hi Phil,
I know that you live in US but I am proud to tell you that Cachaça Leblon is recently available in Québec, Canada as well!
I just discovered it and I love it soooo much!!!
Caipirinha = so simple to make and so flavorful!
Since, I tried different brand and Leblon is definitively the best one, even in cocktails!

Thank you for sharing your experiences with us!