I've often thought about what I've come to call the Vodka Distiller's Dilemma. This little homespun rule observes that the degree to which the popular culture values the vodka maker's craft is the degree to which club patrons can exclaim "Wow! You can hardly taste the vodka!" when said product is put in a mixed drink. The esteem ascribed to that arduously crafted spirit is, therefore, proportional to its ability to hide itself in, say, the average Ocean Spray product. 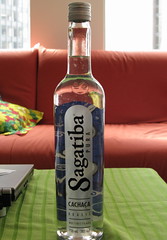 As such, I'm driven to sympathize with Sagatiba Pura, Sagatiba's multi-distilled white cachaça, which sits alongside its more premium Velha and Preçiosa lines. Clearly (no pun intended) much effort goes into this fine spirit, though that effort may end up lost on many.

By itself, it is very smooth. Perhaps not my first choice for a sipping cachaça but, then again, that's probably what Velha and Preçiosa are for.

As a mixer, though, it's darn near perfect. This past weekend, I tried it in a traditional caipirinha as well as the batida de morango recipe (more like a strawberry caipirinha, really) posted the other day. Sagatiba Pura seemed to scream for the fruits to bring out the sugarcane characteristics, which may have been muted during the multiple-distillation process that appears to be the basis for the product's marketing.

Sagatiba Pura was quite unnecessarily savaged in this Forbes review, ranking dead last in a blind tasting of five cachaças. With comments like "the sugar in the caipirinha hides a multitude of sins", it really makes me wonder what the guy was actually tasting. Sounds more like he was looking for an excuse to use that line.

I hope that the Forbes review didn't discourage folks from giving Sagatiba a try. Going three-and-a-half-barrels-with-a-bullet on this one.

Oh... And if you're just now joining us on Cachaçagora, you'll also want to check out the cachaça feature that Mark Tafoya did, featuring Sagatiba.

Hey, John! Thanks for stopping by! Hoping when can connect when I swing by London.

Interesting read..and i tend to agree, i haven´t posted my review of this one yet, i save it for the spring;-)but i`m dying to try the other two..